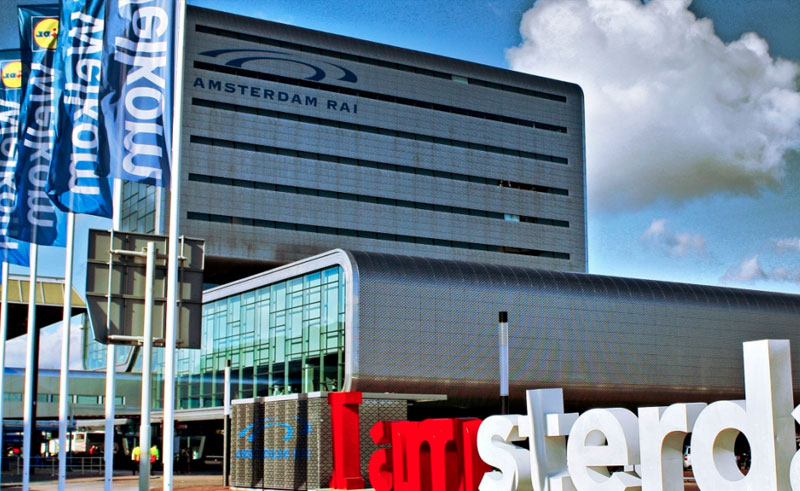 Then a motorboat came by. “The fellow in the motorboat shouted, “Jump in, I can save you.” “No thanks, I’m praying to God and he is going to save me. I have faith.”

Then a helicopter came by and the pilot shouted down, “Grab this rope and I will lift you to safety.” Again, the stranded man again replied, “No thanks, I’m praying to God and he is going to save me. I have faith.”

Soon the water rose above the rooftop and the man drowned. He went to Heaven. When he met God to discuss the whole situation he exclaimed, “I had faith in you but you ignored me and let me drown. I don’t understand why!”

To this God replied, “I sent you a rowboat and a motorboat and a helicopter, what more did you expect?”

It felt like some higher being was presenting some pretty major reasons not to go to ISE last week. And although I ignored them, many didn’t, and attendances for this last Amsterdam ISE before the move to Barcelona were down considerably, according to most of the exhibitors I spoke to. Having a show uber-exhibitor like LG announce their non-attendance at short notice because of the Corona virus, and then Storm Ciara arriving, was clearly a blow (pun intended), and many other exhibitors and visitors came to the same decision.

Whilst scouring Schiphol for alcohol may not be a new process for many of us, mine was the requirement for alcoholic hand wash, which at the time of writing, appears to have helped me stay healthy. But after a pretty stormy flight, a traditional alcoholic drink was certainly in order. Kudos to my Easyjet pilot for touching down in a Dutch gale like a butterfly with sore feet.

So whether your screen requirement is for a touring concert, a corporate installation, or for a backdrop for the next Marvel film rather than the traditional green-screen, ISE had all the answers. Pixel pitches are now possible at under 1cm. Amazing for fixed installations, but this doesn’t really work with rental products where panels are being rigged and de-rigged frequently and the LED bulbs themselves would be damaged. So pixel pitch for rental, and certainly touring seems to have reached its Goldilocks size. High Dynamic Range, (HDR) has been adopted in Broadcast for a while now, and is now being widely adopted by LED screen manufacturers, so the improvement will come from better pixels, not just more normal ones.

The technology required to swap out faulty panels is pretty impressive to a relative layperson too, despite it being pretty generic across all brands. As long as you have a vacuum cleaner, it’s a very quick process, and something that seems close to witch-craft to a person used to working with single panel, large LED “TV” screens.

What was clear though is that the processing technology that drives the screens has to be extraordinary, and Brompton Technology have nailed this sector. All the major manufacturers seems to be using their technology for their premium products.

And perhaps even more important are the creative geniuses who create the content. Some of it was mind-blowing.

For me, Panasonic had the most impressive and compelling stand, demonstrating many of their market-leading products on an E-Sports set. Their soon-to-be- launched, super-bright 50,000 lumens projector had to be toned down for use on the set, such is its power, and the large LED screens and PTZ cameras gave an impressive overall experience of the range of technology that Panasonic has in its arsenal.

The Panasonic AI-driven tracking technology is clever, designed to make lecture theatres more efficient, and allowing the tracking of individuals even if the direct line of sight is occasionally interrupted. The cost savings and efficiency benefits for multi-room sites using this technology, particularly when incorporating NDI, are significant.

It was also interesting to see how many exhibitors and visitors were bridging the AV-Broadcast divide, demonstrating how the two disciplines are converging, with many friendly faces present that were more familiar to me at September’s IBC, rather than February’s ISE.

Anyone who has had enough time on their hands to read my previous show reports will know that any Show needs to know what it’s trying to do, and who it’s trying to attract, and to ensure a rewarding experience. Both IBC and ISE seem to have outgrown Amsterdam’s RAI, and I dare say ISE’s decision to move future shows to Barcelona was as much to do with the city’s shameless profiteering of the attendees than the size of the halls themselves.

In time, could we see the two shows merging in to one super-show? Many of the global brands spend millions on these events, like a huge touring merry-go-round, so the desire to consolidate the shows whilst still reaching the same audience must be strong.

And this all assumes that the Corona curse that blighted ISE is just a passing sniffle in Tradeshow history, and not a full-blown pandemic that could change forever how we view business travel. It is curious that the internet has revolutionised how we all do business, and yet we all still consider these as must-attend events. The power of face to face meetings is stronger than ever and that can not be over-estimated. Just don’t be a lemming and follow the crowd, just because the FOMO factor is so strong.

Clearly, for an ISE show veteran bored of canals and push-bikes, Barcelona will have more of a tourist appeal. But be warned…I’d hazard a guess that most of us have not been in February. It’s not always shorts weather, that’s for sure. Let’s just see if a change is as good as a rest. I have faith.

Are Coronavirus measures inequitable?
April 22, 2020
To the UK Finance and Leasing Industry
April 19, 2020
Should I Cancel My Finance Agreement Direct Debit?
March 29, 2020